Regen Projects is pleased to present Flags and Debris, an exhibition of new work by Los Angeles-based artist Doug Aitken. The works form an ecosystem of interconnected mediums, mixing dance, performance, film, sculpture, and handmade objects. Each plays off the other, creating a choreography of images, language, and sound.

The exhibition comprises all new work conceived in the last 10 months, a time of profound change in the face of the pandemic. The body of work reflects the tension collectively felt between our isolation from the physical landscape of the exterior world and newly created spaces for turning inward to explore the subconscious landscape. At heart, the works are a portrait of a society moving toward the future.

Flags and Debris consists of a new series of handmade fabric wall hangings and a hallucinatory multi-screen installation. The fabric works were generated during lockdown when, searching for materials inside his home, Aitken began to cut clothes and fabrics. From these materials he created shapes to articulate words and phrases that spoke of a shifting world in continuous change. Conversely, the physical process of creating these works was a study of stillness. They resemble flags and banners while also suggesting protective coverings for warmth and security.

The collaged layers of fabric build into visual and written abstractions. These works provoke reflection on the nature of reality and visions of the future: Fragmented phrases like ‘Noise,’ ‘Digital Detox,’ ‘Data Mining,’ ‘Nowhere/Somewhere,’ and ‘Resist Algorithms’ appear like handcrafted digital glitches, while other works ruminate in full prose, including an excerpt from a text by Joan Didion, whose writing has served as an inspiration to Aitken. 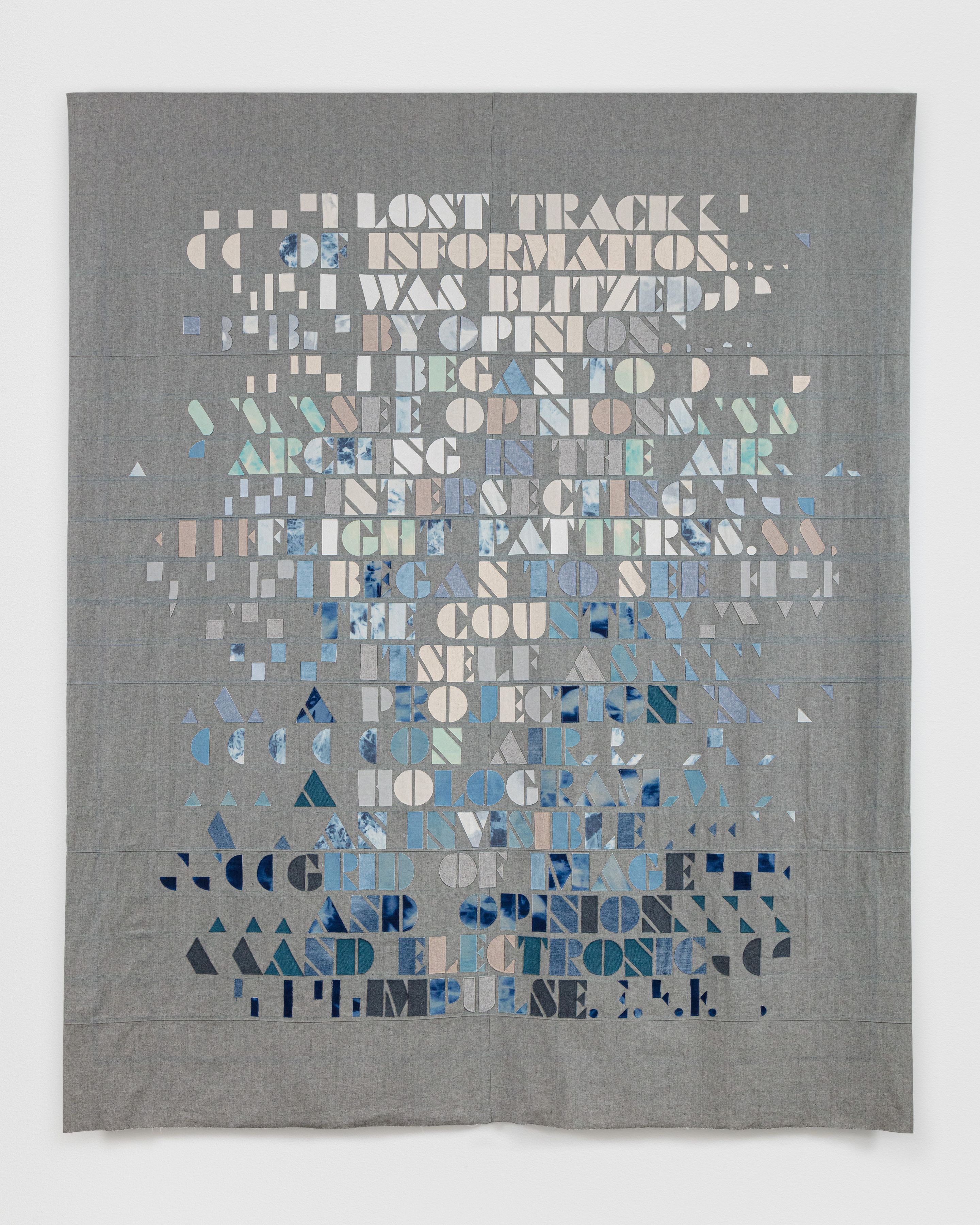 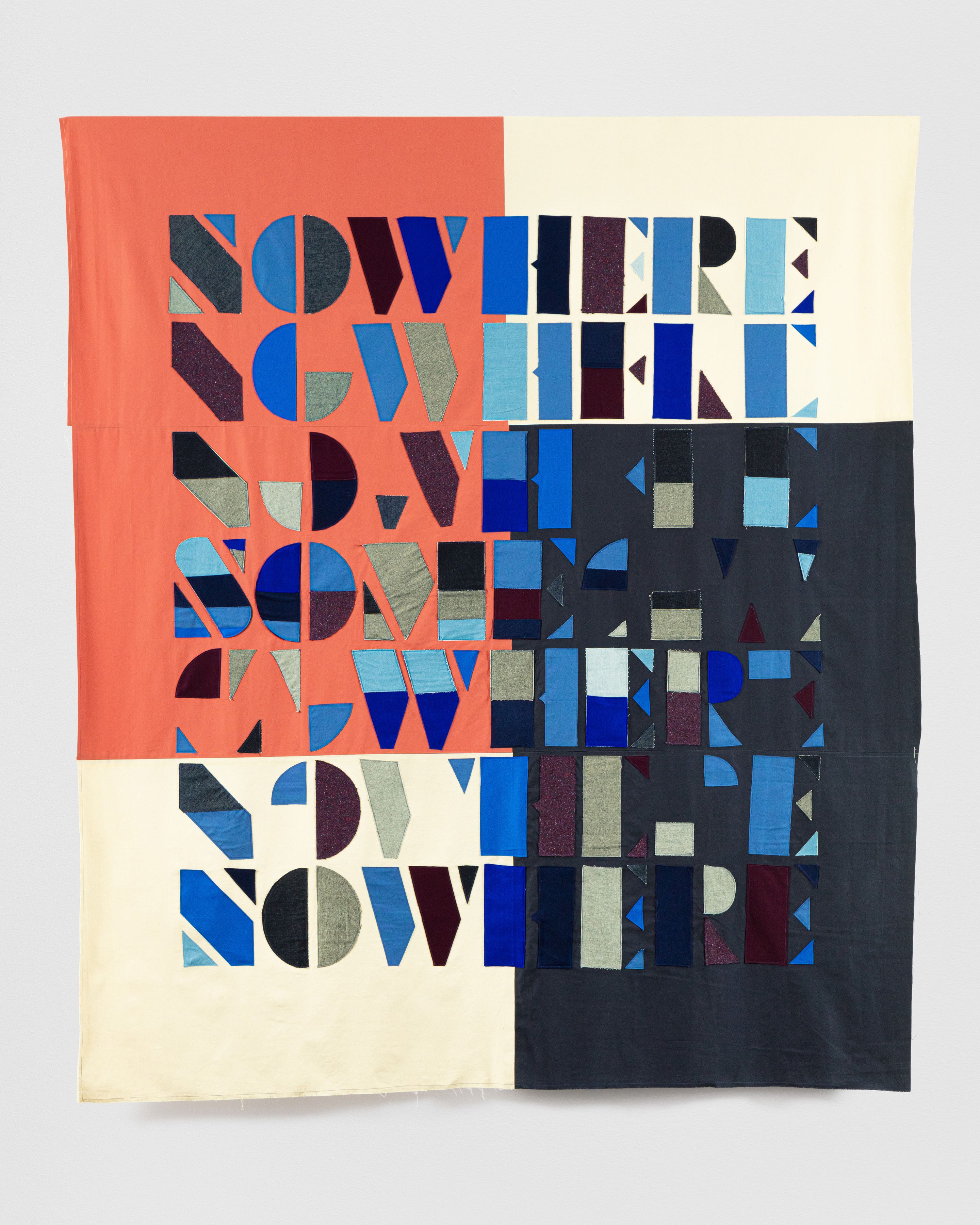 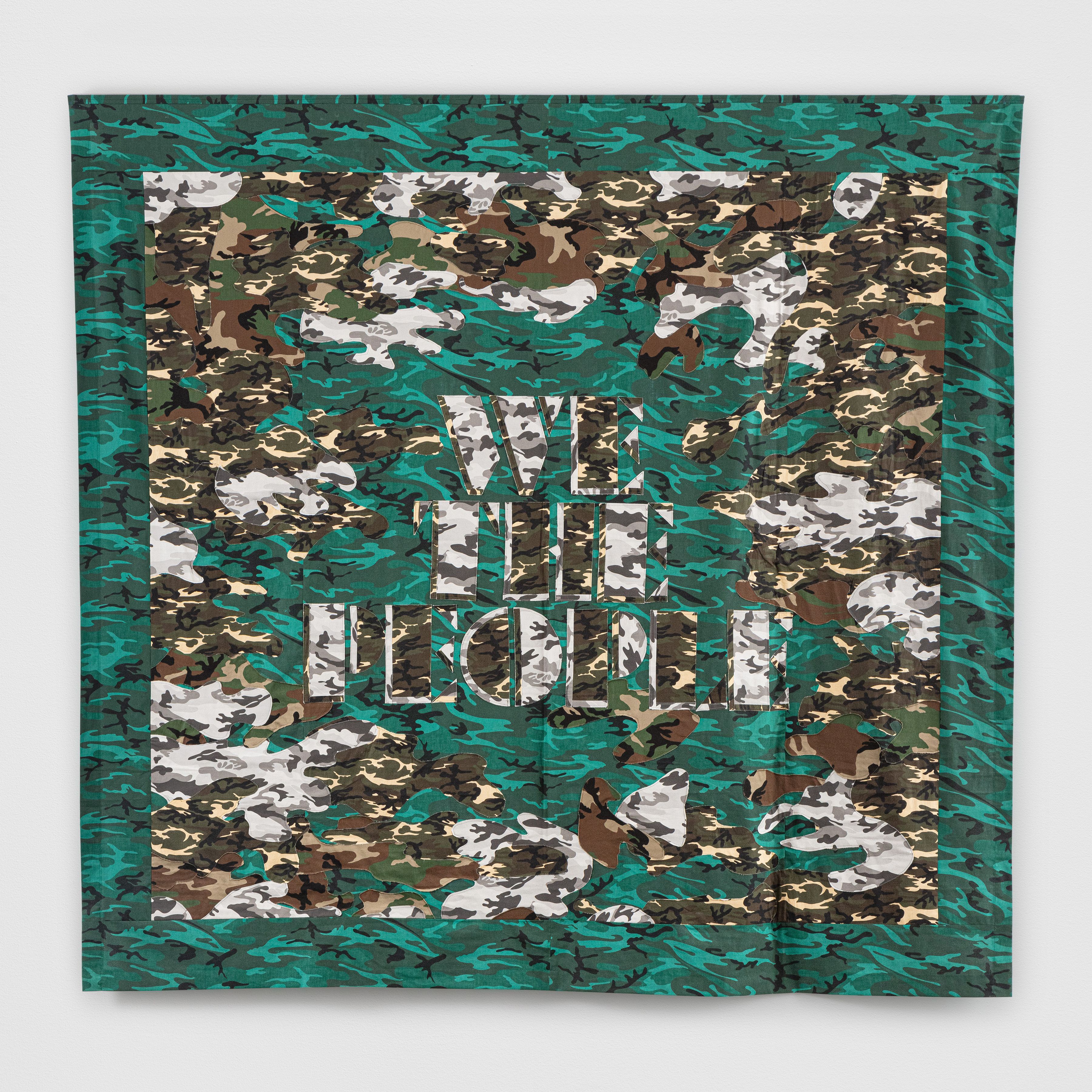 “Aitken’s forms live between languages, one expressive, one critical; one emancipatory, one as suave as the advertising persuasion; one constrained and ordered, one open; one reductivist, one porous to the natural sensuality of bodies and landscapes—porous to promiscuity, for which sensuality is a promise of something else, an escape from a growing, controlling uniformity and the morphology of mass communication. From this tension emerges an emancipatory and creative space with no walls; a place common to many, to come and contemplate the world, off the grid, where one can say to another, eye to eye: ‘you are here and so am I.’”

—Philippe Vergne in “You Are Here and So Am I,” Doug Aitken: Electric Earth, 2016 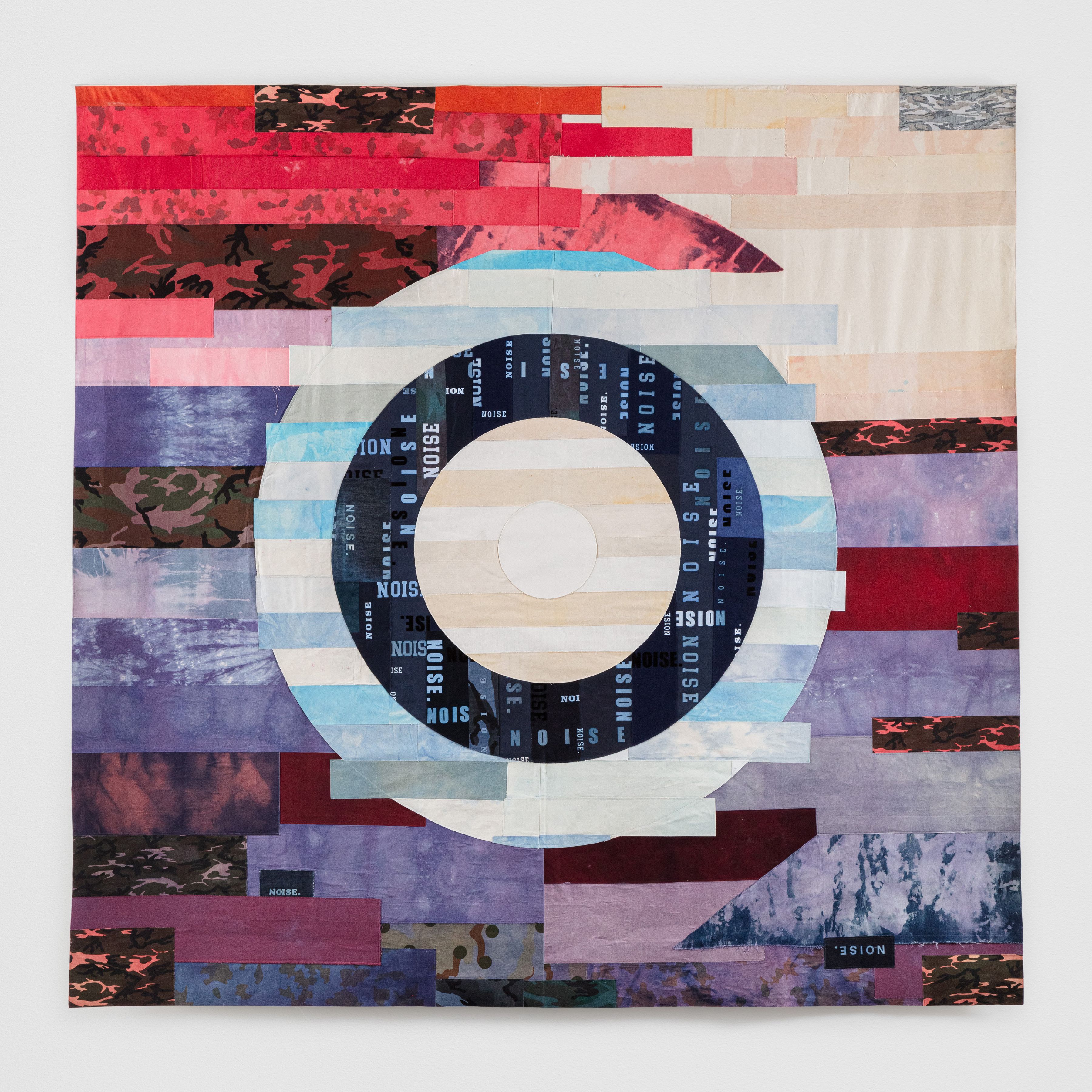 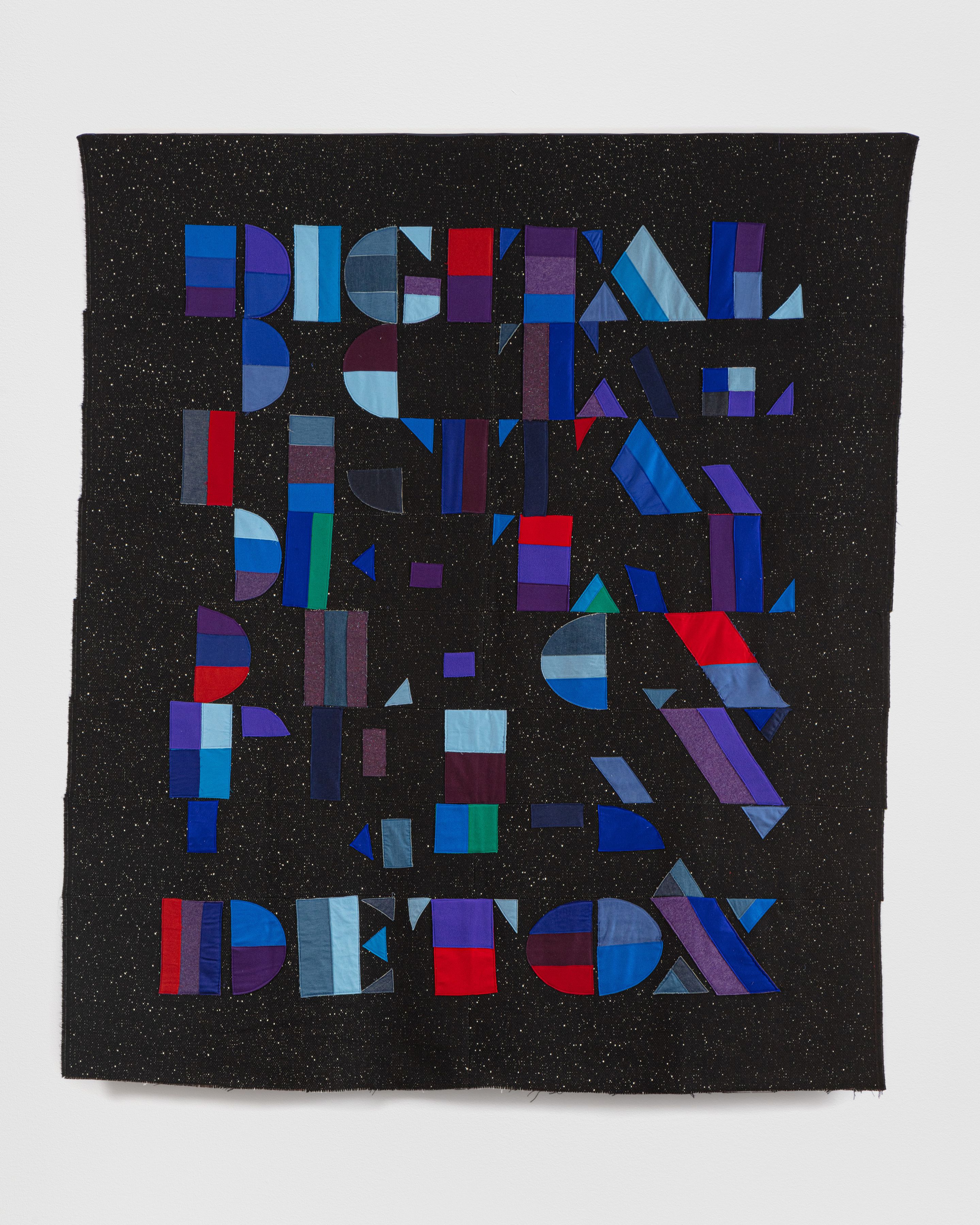 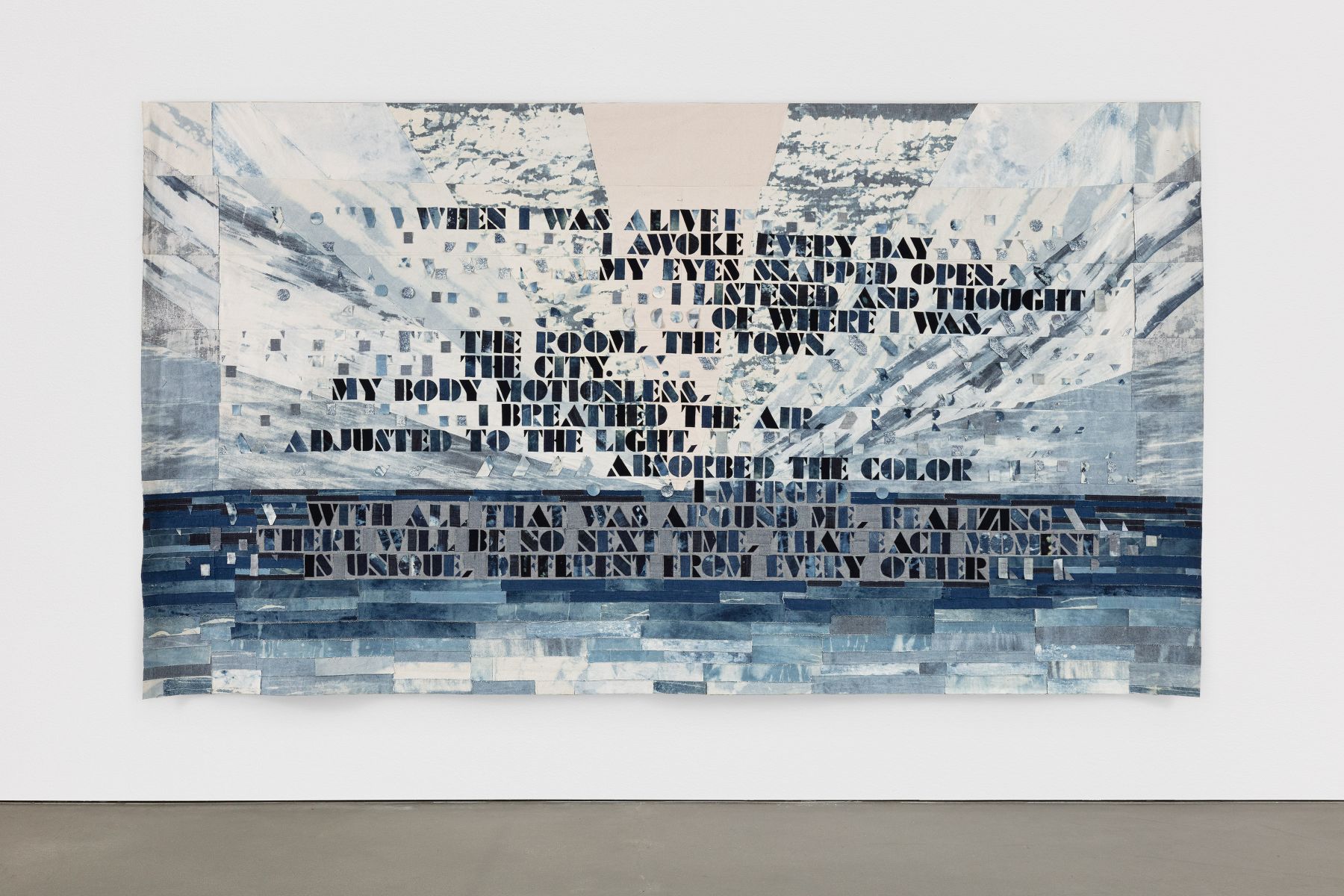 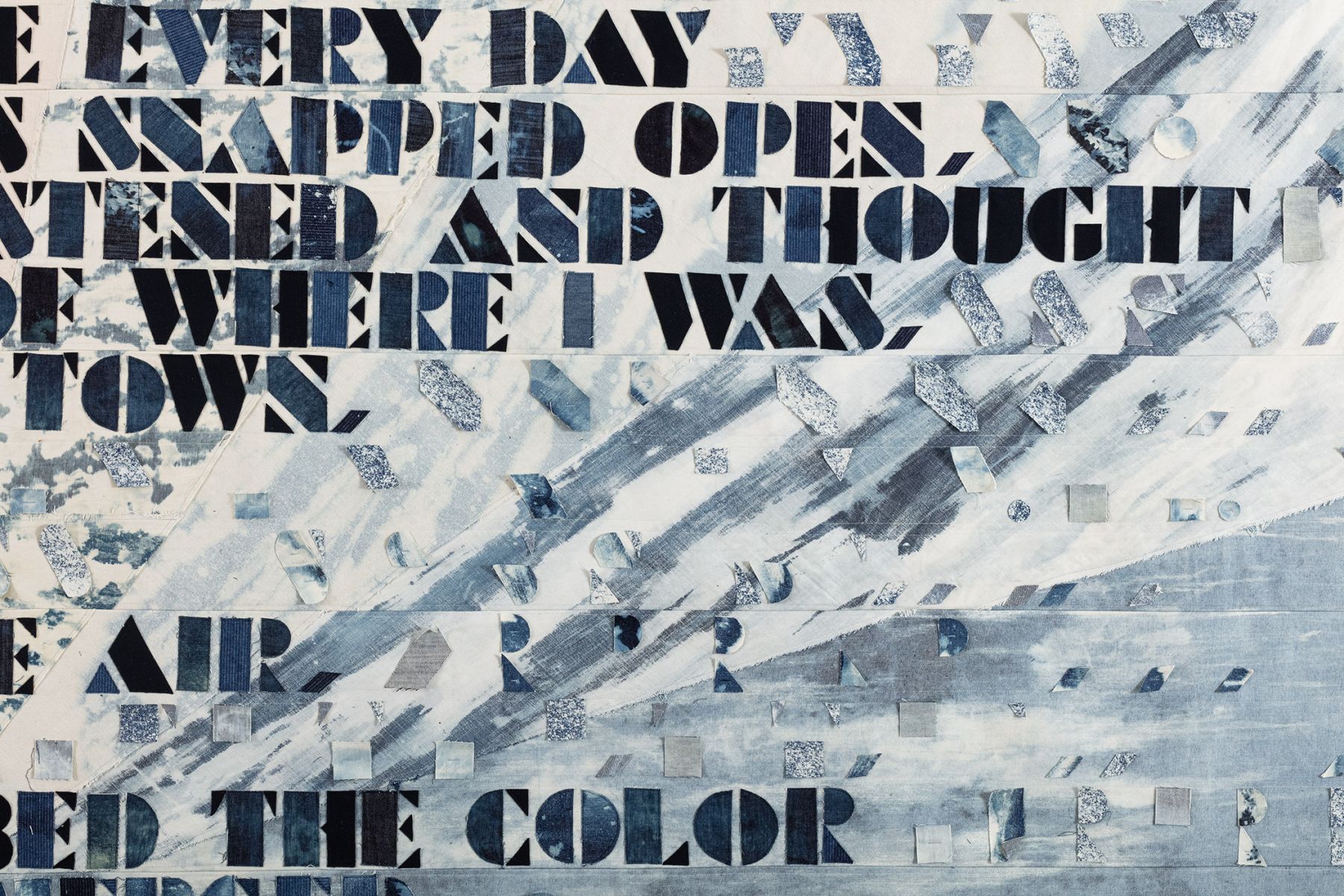 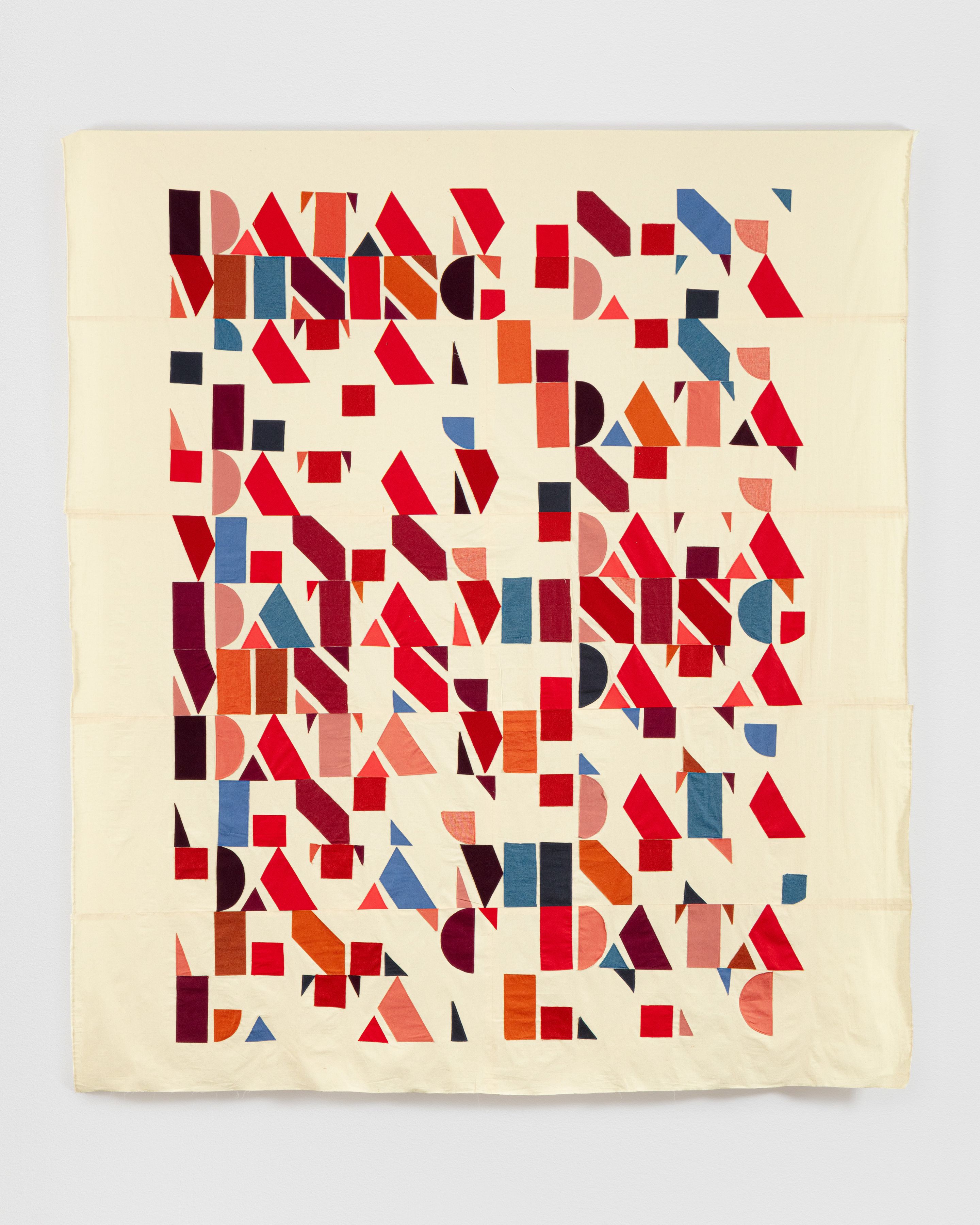 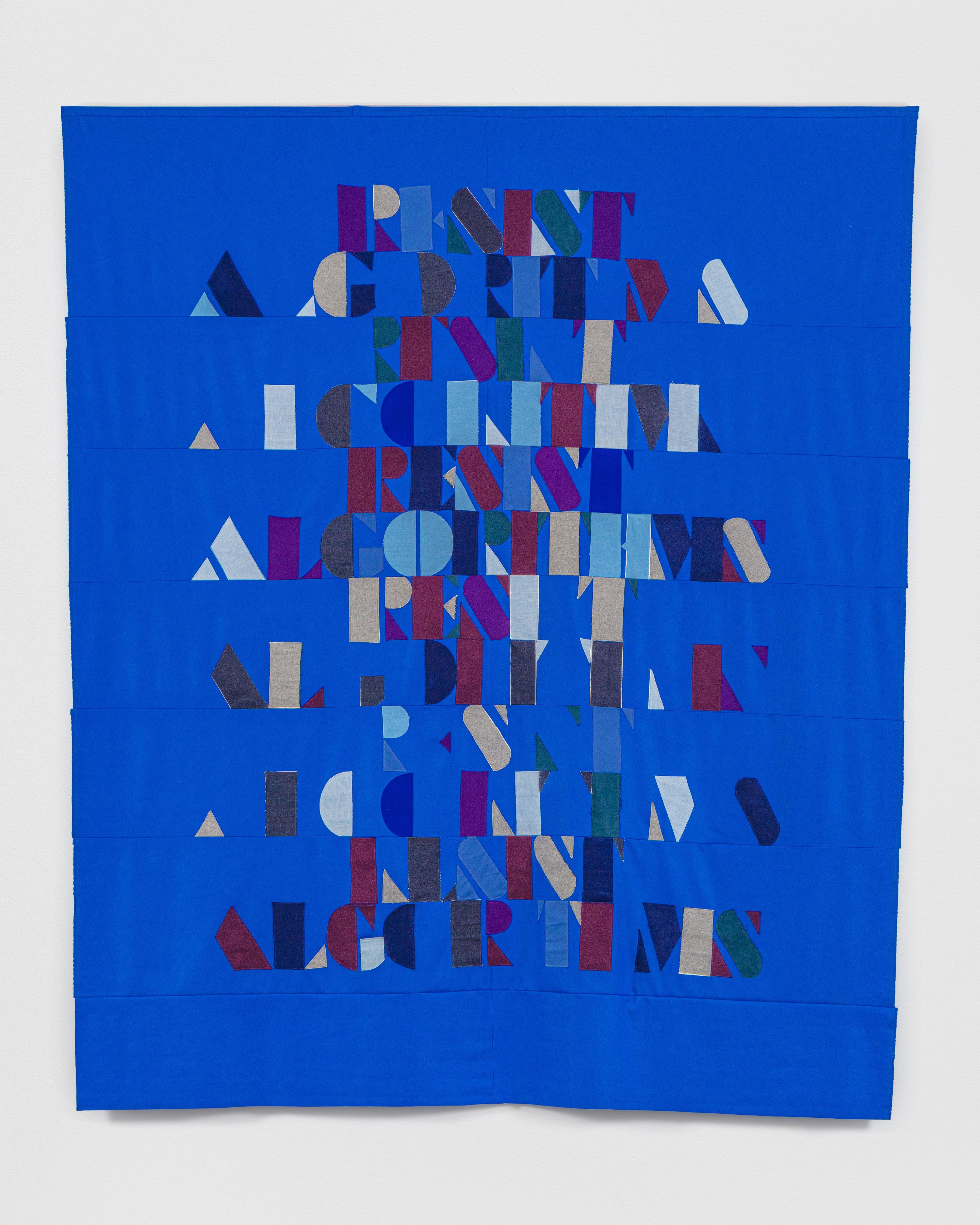 “One of the most profound things that any kind of act of creation can give you is to engage you in the present, to suddenly bring you into the present. Those moments are so fleeting and rare, but when you do find them, it is the rarest drug; it’s a private nirvana. It’s something that is inexplicable.” 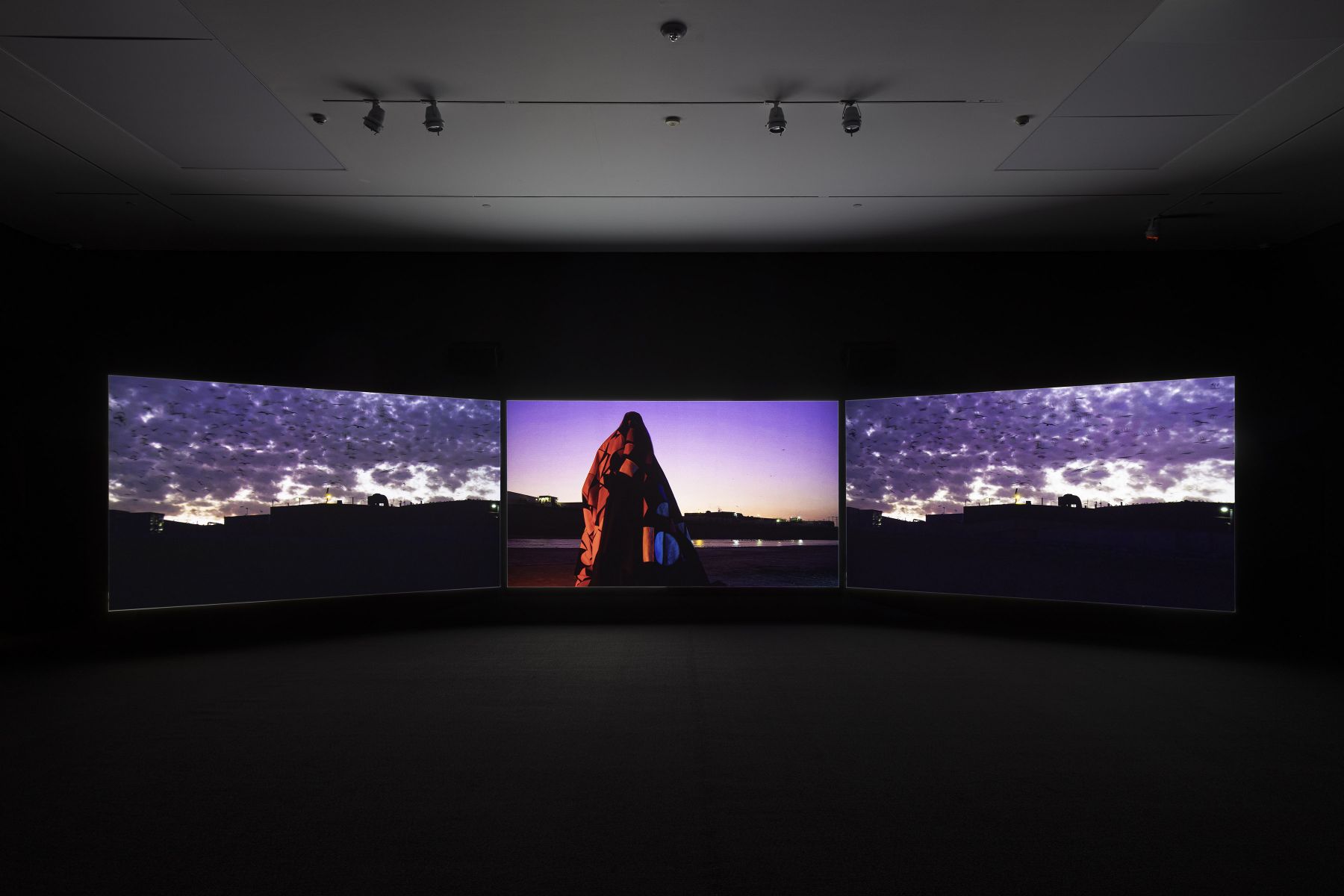 Aitken also initiated a series of impromptu performances throughout Los Angeles using the new fabric works. He filmed these performances, translating them into the new multi-screen installation. The performances are based on choreographies Aitken developed working with LA Dance Project. Wrapped in the artworks, the dancers moved through desolate industrial locations and empty urban spaces. Their movements were unique to each setting, activating the spaces with kinetic energy.

The film captures fleeting moments and mysterious and random encounters. Sleepwalking bodies are wrapped and covered, moving, jerking, fighting, and thrusting through the nocturnal, desolate city. The fabric moves through the wind as though empty — phantom presences roaming through spaces. The film reflects snapshots of a surreal life, as if seen out of the corner of the eye, pushing one to explore a modern landscape that is in continuous flux. It is set in shadowland spaces such as freeway underpasses, urban rivers, and desolate industrial areas where empty sites are transformed from passive to active. Bodies occupying the artworks shapeshift under the layers of fabric in movements that explore the unseen and hidden worlds of interior thought. 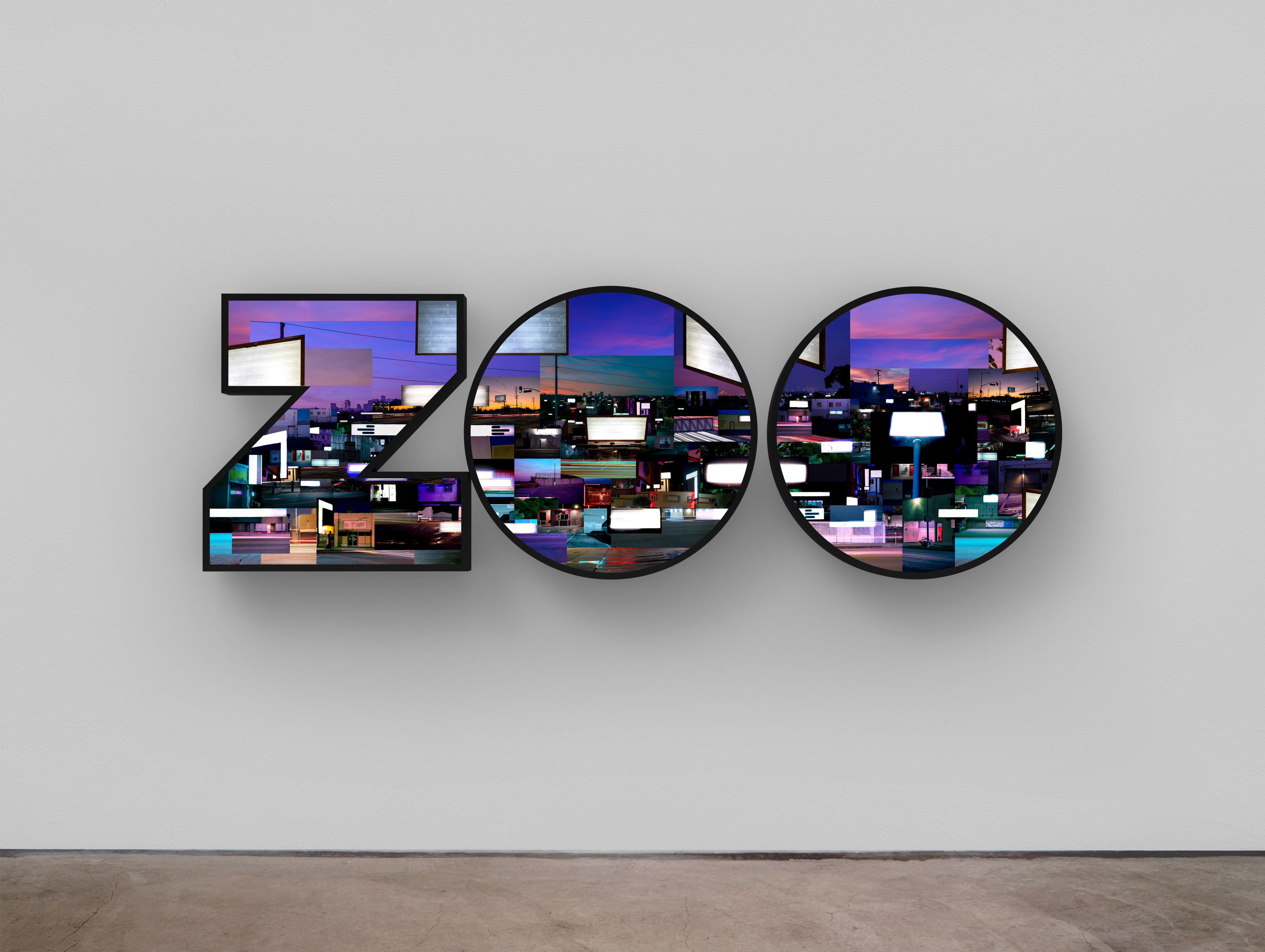 “Time is the structure underneath everything we experience and every decision we make. …Los Angeles is not a city but a series of fragments—all separate pieces of experience, places, encounters, and information. In this sprawling city, you can author your own story any way you decide to. Simply by turning left, right, or driving straight, you change the narrative.” 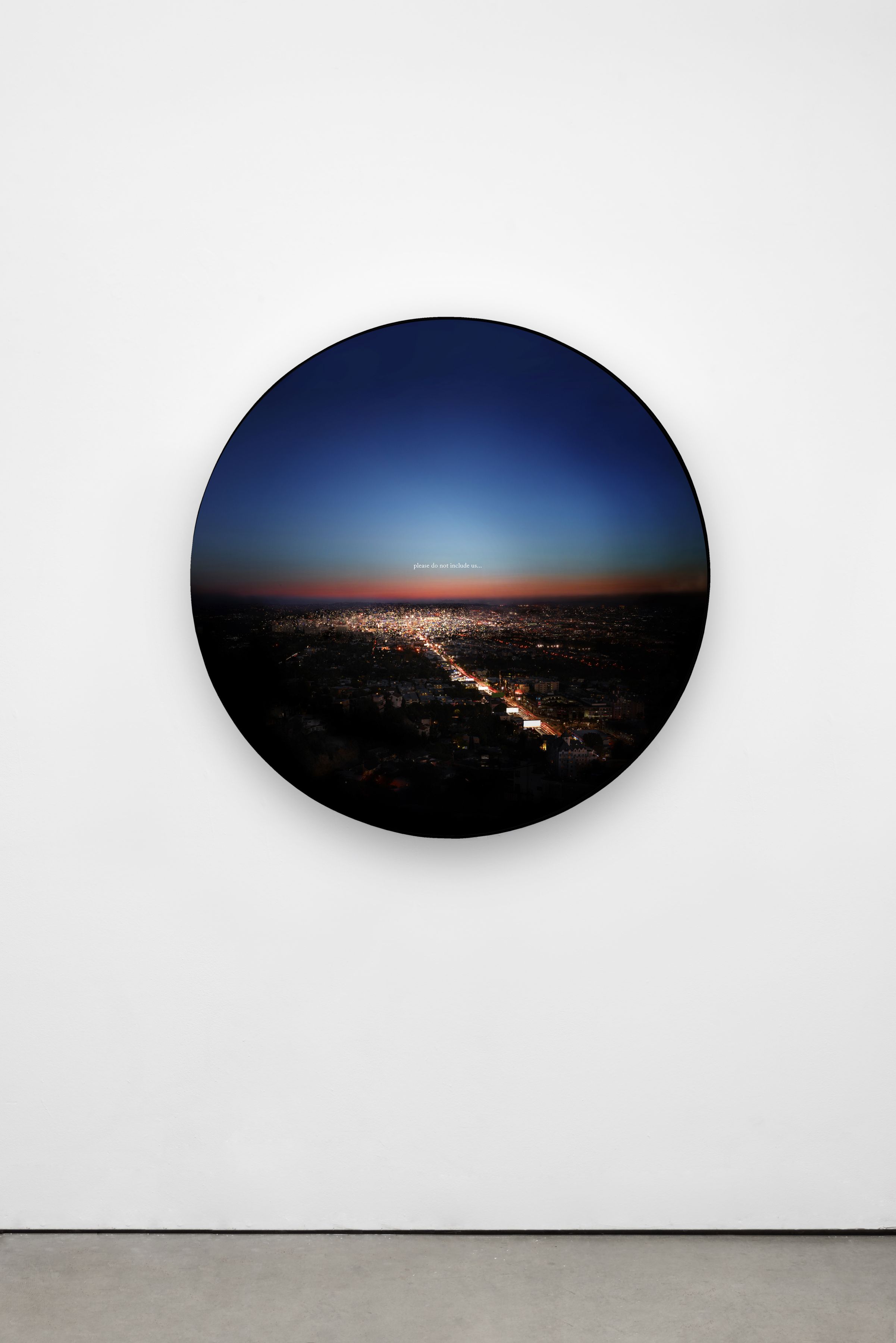 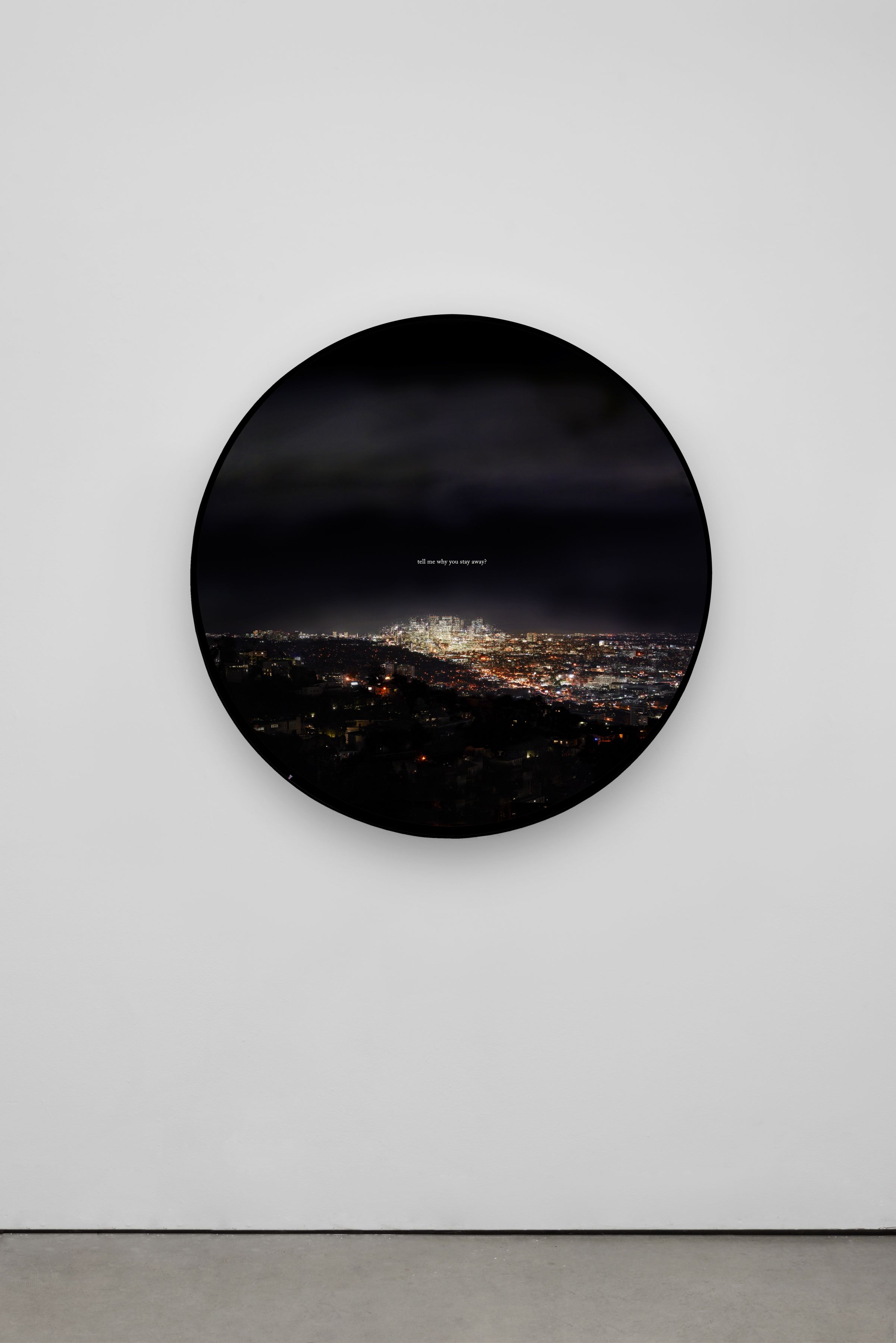 In discussing the work Aitken said, “Flags and Debris acts like a kaleidoscopic mirror, reflecting a broken narrative landscape. Pulses of electricity merge with the human heartbeat through a landscape that is expansive and anonymous. As we look at these artworks, we stand looking at a horizon transfixed at what could be, uncertain of where we are positioned, but looking towards the possibilities of the future.”

The exhibition furthermore extends outside the gallery walls by way of a poster campaign wheat-pasted across Los Angeles. Containing a QR code, the posters act as virtual portals, expanding the art experience to anyone — anywhere — in the city. Ubiquitous and yet hidden in plain sight, the posters are an egalitarian art encounter, further blurring the boundary between our physical and digital realities. Those with the curiosity to engage with it are transported in place to an experience of Los Angeles as they have never seen it before.

Aitken would like to thank LA Dance Project and Sébastien Marcovici for their participation in this project, and in particular, the talented dancers Anthony Lee Bryant, David Adrian Freeland, Jr., Mario Gonzalez, Vinicius Silva, and Nayomi Van Brunt. 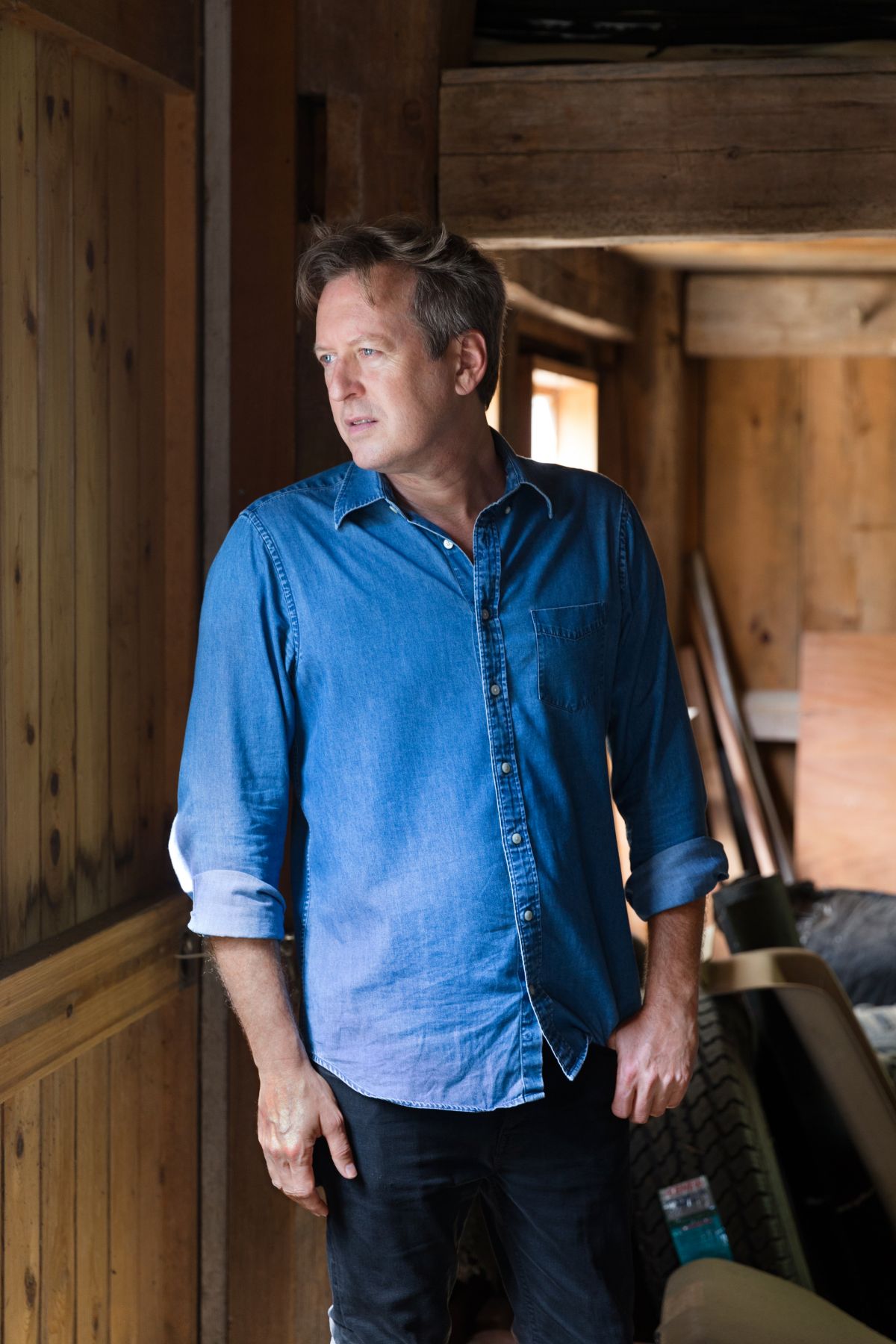 Doug Aitken (b. 1968, Redondo Beach, CA) studied at Art Center College of Design in Pasadena, CA, where he received his BFA in 1991.

Aitken has realized a number of special projects including, most recently, New Horizon, a multifaceted art event centered around a reflective hot air balloon that traveled across the state of Massachusetts (2019); Sonic Mountain (Sonoma), a site-specific sound sculpture commissioned for the Donum Estate in Sonoma, CA (2019); Don't Forget to Breathe, an offsite installation in an empty storefront on Santa Monica Blvd. in Los Angeles and presented by Regen Projects (2019); Mirage, a mirrored house with iterations in the Swiss Alps of Gstaad (2019), the interior of the historic former State Savings Bank in Detroit (2018), and the desert of Palm Springs, CA for Desert X (2017); Underwater Pavilions, a large-scale underwater sculptural installation off the coast of Catalina Island (2017); and Station to Station, a multi-site, month-long journey across America that brought together an international group of artists, musicians, writers, and thinkers (2013).

He has been the recipient of numerous awards including ArtCenter College of Design Lifetime Achievement Award (2019); World Frontiers Forum Frontier Art Prize (2017); and Americans for the Arts Outstanding Contributions to the Arts Award (2016).